The City wants to build a ferry terminal at an environmentally sensitive location on Coney Island Creek (above). Dredging the entrance of the creek will poison the surrounding community and end all educational and recreational activity at the beach and fishing pier at Kaiser Park! 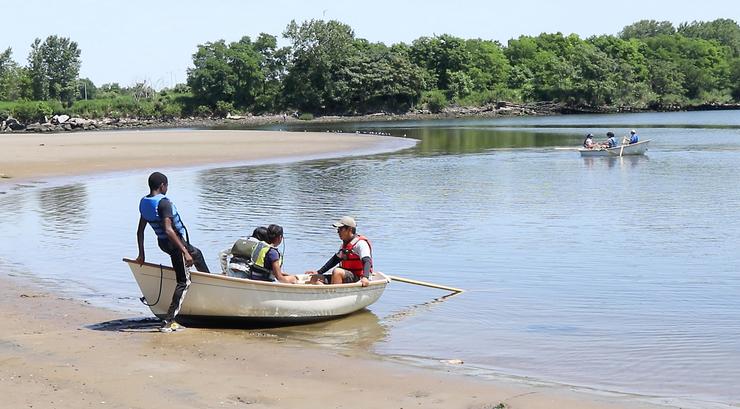 Upcoming Activities
The U.S. Environmental Protection Agency (EPA) is collecting samples of Coney Island Creek in Brooklyn, New York to determine if there has been a release or if there is a threat of a release of hazardous substances to the creek that may harm people’s health or the environment. EPA is collecting surface water and sediment samples throughout the creek to identify and evaluate contaminants such as volatile organic compounds, semivolatile organic compounds, pesticides, polychlorinated biphenyls (PCBs), and metals. The sediment samples are collected using the vibracore sampling technique, a process of obtaining sediment samples by vibrating a core barrel into sediment. The sediment samples are being collected up to six feet below the sediment surface in certain areas of the creek.

Past Activities
In September 2020, EPA completed a preliminary assessment of the Coney Island Creek site in response to a petition from a member of the community to assess the creek. Information gathered during the assessment shows that the creek is used for a variety of recreational activities, such as birding, kayaking, boating, fishing, and swimming. Although there are postings of a fish advisory in the area, the creek is still fished for human consumption. Based on the information gathered during the assessment, EPA will collect samples to determine if there is a potential threat to public health and the environment.

More information about the site is available on EPA’s website:

On February 12 2020, the NYCEDC announced that the final location for the Coney Island Ferry had been chosen.(Site 2a, at right) The City's Environmental Impact Statement (EIS) says that the required dredging to access the site will uncover hazardous and toxic materials.

We were surprised to learn that the NYC Economic Development Corp. has issued an RFP to design and construct new bulkheads on the south side of Coney Island Creek between West 12th Street and West 23rd Street. Elected officials and Community Board 13 received no previous notification regarding the project and the August 6 informational session at the EDC's offices had passed by the time community members became aware of the RFP. The $32 million project includes "evaluation of the existing conditions, replacement of select bulkheads, raising of select bulkheads, and evaluation of alternate shoreline-raising possibilities." The project is expected to be completed by 2022.

"The decision whether to issue a permit will be based on an evaluation of the probable impact including cumulative impacts of the proposed activity on the public interest. That decision will reflect the national concern for both protection and utilization of important resources. The benefit which reasonably may be expected to accrue from the proposal must be balanced against its reasonably foreseeable detriments. All factors which may be relevant to the proposal will be considered including the cumulative effects thereof; among those are conservation, economics, aesthetics, general environmental concerns, wetlands, historic properties, fish and wildlife values, flood hazards, floodplain values, land use, navigation, shoreline erosion and accretion, recreation, water supply and conservation, water quality, energy needs, safety, food and fiber production, mineral needs, considerations of property ownership and, in general, the needs and welfare of the people."

The Citizens Water Quality Testing Program has recently recorded unacceptable levels of pollution at all of the test sites on Coney Island Creek. This means that there may be many more illegal sewage hookups to the creek's storm sewers. The high readings could also be related to the massive infrastructure construction going on in Coney Island. The levels fluctuate, but are still showing some of the highest readings in the entire city.

WHY THE CITY'S PLAN IS DEADLY
READ MORE: 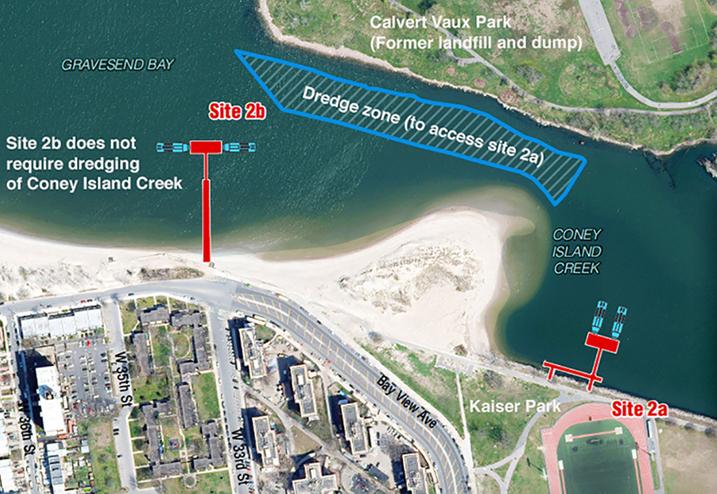 The New York State Department of Environmental Conservation (NYSDEC) proposes to remove a number of NYC waterways from the state’s “List of Impaired Waters,” sometimes referred to as the “Clean Water Act Section 303(d) List.” It is important that SWIM members oppose these delistings and keep pressure on the City and State agencies to bring NYC’s waters into compliance with water quality standards.
Help protect NYC’s waters by demanding they be  listed as impaired and in need of a “Total Maximum Daily Load.” Please submit comments by August 6, 2018 to:
Sarah Rickard
NYS DEC - Division of Water
Bureau of Watershed Assessment and Management
625 Broadway
Albany, NY 12233
4pwlinfo@gw.dec.state.ny.us

Please send all comments and questions concerning this application to Christopher.W.Minck@usace.army.mil

The City changed the location of the ferry pier from a safer site at West 33rd Street to the above site that is environmentally sensitive.

Coney Island Creek: The Good, the Bad, and the Ugly!

A construction crew at the Kaiser Park fishing pier, July 2019. Another backroom deal?  The city has apparently chosen the worst location for the Coney Island ferry. Photo by Charles Denson

Tell the army corps of engineeers to reject the edc's permit application!

The New York City Department of Environmental Protection (DEP) announced today the installation of new signs at stormwater (MS4) outfalls along Coney Island Creek in Brooklyn. The new signage was installed at eight locations to notify residents of the presence of an outfall and prompting them to contact 311 with an outfall ID number, should they observe discharge after a period of dry weather. This pilot is one of many efforts to continue water quality improvements in Coney Island Creek and was developed with input from the community after a series of workshops with the Coney Island Beautification Project, the SWIM Coalition, Partnerships for Parks, NY Aquarium, and meetings with . . . .

The popular Kaiser Park fishing pier and adjoining beach on Coney Island Creek are in danger of being destroyed to build a ferry terminal.This location is also a horseshoe crab spawning ground and an environmentally sensitive area. Photo by Charles Denson