Coney Island History Project staff recently noticed that spawning horseshoe crabs had moved further up the creek than ever before and were getting snagged and trapped at the illegal dump site below the Cropsey Avenue bridge. In June, two History Project volunteers climbed down ladders and began freeing crabs that had become trapped by ropes, tires, and other debris. We removed snags, concrete, and tires from the site and restored it to a more natural state. CIHP plans to monitor the site and continue clean-ups in the future. 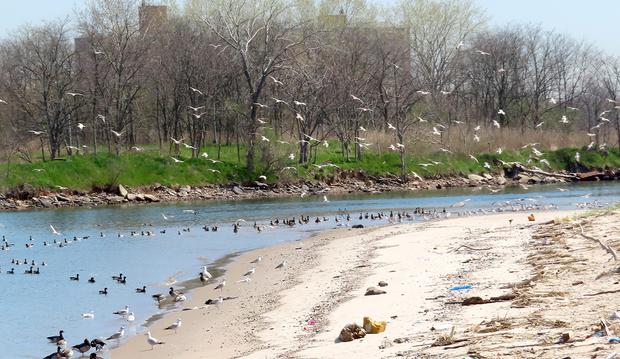 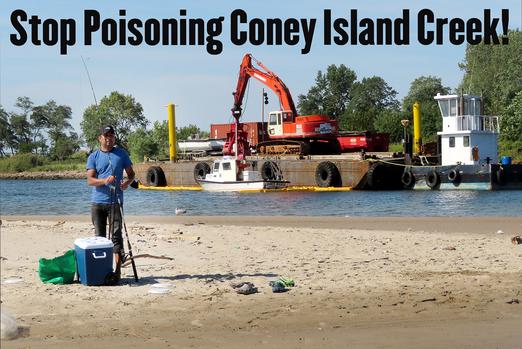 Coney Island Creek is the last remnant of a vast and vibrant salt marsh estuary that once covered nearly 3,000 acres between the sand dunes of Coney Island and the glacial plain of what is now Southern Brooklyn. The waterway became Coney Island’s earliest attraction as the island’s first hotels sprang up along the creek’s shoreline during the 1820s. Until the late 19th century, pristine Coney Island Creek remained a popular destination for boating, fishing, crabbing, and hunting waterfowl.

The sprawling resorts that opened along the oceanfront in the 1870s began using the creek to dispose of raw sewage, initiating of a pattern of abuse that continued for the next century. As Coney Island developed and grew into the “World’s Playground,” the surrounding marshes were filled in with garbage and ash, polluting the creek and transforming it into a two-mile long industrial waterway that still drains Southern Brooklyn through numerous storm sewer systems. For several decades, the neglected and toxic creek survived misguided attempts to destroy it by filling it in rather than restoring it.

The Clean Water Act of 1972 and a new ecological awareness changed public perception and gave new life to Coney’s neglected waterway. The 100,000 residents who live in close proximity to Coney Island Creek are coming to realize that the creek can be an asset instead of a liability. It’s now a case for Environmental Justice.  Today the creek has four parks along its shoreline and is once again being used for recreation, fishing, and boating. But much work remains to be done in restoring and protecting this dynamic ecosystem. This work will require a collaborative effort and public participation is needed and appreciated. See the News section for upcoming events.

The Coney Island History Project's special exhibition for the 2018 season, opening on Memorial Day Weekend, is "Coney Island Creek and the Natural World." Coney Island is best known for its magnificent artifice, a manufactured reality and fantasy world that replaced the vibrant natural environment of sand dunes and salt marshes that existed before development began 200 years ago.

Very little of that environment has survived. The towering sand dunes were flattened, and the wetlands were filled in for development leaving the island vulnerable to storms. Even the island's world-famous beach is artificial, created. . . . 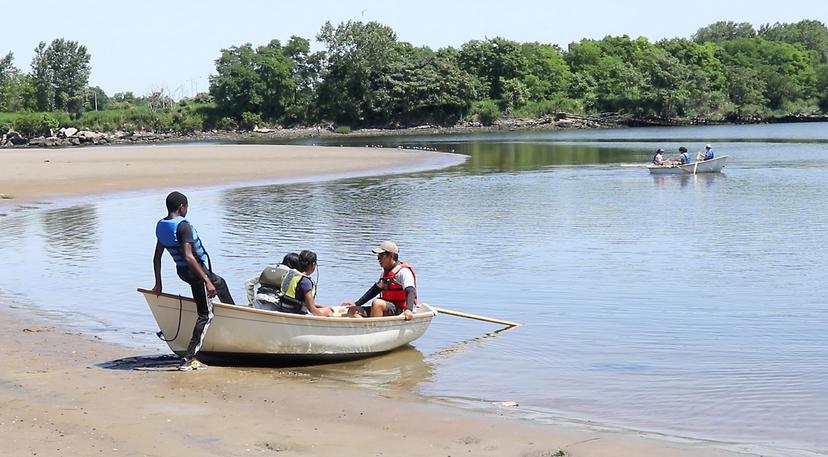 THIS EXHIBITION HAS CLOSED For more information or a private viewing: www.coneyislandhistory.org

​The City plans to build a ferry dock at this tranquil site on Coney Island Creek, reversing 50 years of environmental improvements on the creek. NO mitigation is planned for wetland restoration or protection for Kaiser Park and the surrounding community.

Learn the fascinating history of the creek! 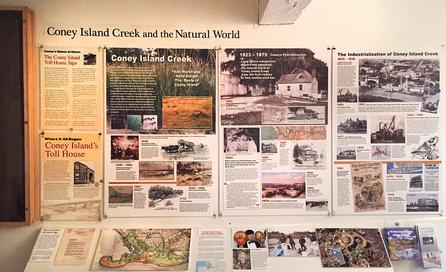 The EDC plans to dredge this narrow channel at the mouth of Coney Island Creek. This will destroy a wildlife refuge and release toxic pollution from the former landfill at Calvert Vaux Park.

ARTICLE ABOUT THE EXHIBIT

The New York City Economic Development Corporation has filed permit applications to build a ferry terminal in the most environmentally sensitive section of Coney Island Creek. The EDC relocated the ferry dock from a safer site on Gravesend Bay to an ill-suited site at the Kaiser Park fishing pier that requires continuous dredging that will expose the public to toxic materials. No mitigation or monitoring is planned. Please read the story here:

DEMAND MITIGATION AND ACCOUNTABILITY FOR THIS ILL-CONCEIVED PROJECT!

What is Coney Island Creek?